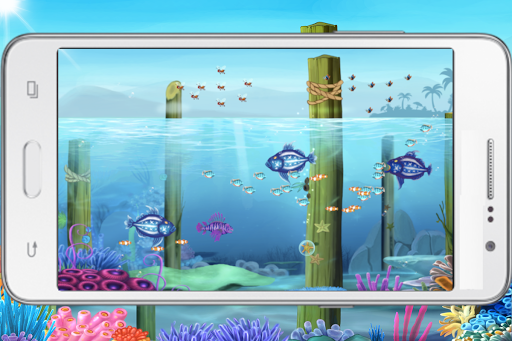 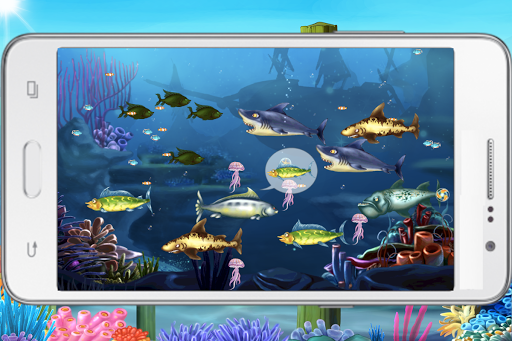 Hunting fish and eat fish is the fish war in the ocean.
Life in the ocean, fish survive when big fish eat little fish .To live, fish eat fish is the law of survival of the sea. This fish game will help you to understand this rule.
In the game you’ll control your fish to hunt and eat smaller fish meanwhile need to keep away from the big fish.
In the ocean there are many hungry fish and shark hungry, they eat all the other fish they meet.
As you can see in the game, it has many hungry shark, angry shark and catches your fish everywhere.

How to PLAY :
– There’re 3 types to control your fish in the game:
+ TAP and SWIPE on the screen to move your fish.
+ Use JOYSTICK to control your fish
+ Use ACIDOMETER on the device to move your fish.
– When the game starts you’ll be small fish, so you need move and eat smaller fish to become big fish. Try not to make your fish be hungry, eat fish constantly to get score. When you become the largest fish you’ll be winning.
– You must keep away from the angry sharks, hungry sharks because they will eat your fish. You also have to keep away from all bigger fishes; big fishes will eat your fish if you be near them.
– Mussel have pearl but it is also a kind of fish trap, eat pearls and quickly leave the mussels when they close their mouth.
– Fish hunter which is bigger than your fish it’ll follow your fish everywhere, try to move your fish continuity to avoid it.
– When you eat fish a lot, become a largest fish and get enough score, a mermaid will appear if you still keep 3 lives as well. The mermaid will move across the ocean and release the beautiful starfish, try to follow the mermaid to eat all starfish which the mermaid released to raise the current score.
Feature of the fish game:
– Game has 40 levels and we will create more level in the next time.
– In the game there are many beautiful fishes of the ocean: carp fish, tiger sharks, white sharks, swordfish, starfish, coral, squid, whale…
– The effect of bubbling bubbles and real waves sound.
– Have many items in the fish game:
+ Starfish: eating it to get 100 scores
+ Slow item: eating it to stop fish movement which near it
+ Bomb: you need control your fish avoid bombs if you do not want to explode.
+ Speed item: eating it to move faster
+ 1 up item: eat it to make your fish be bigger
+ Light bulb: eat it to light up everything around
Eat fish to live, eat fish to become bigger fish and your fish will be the biggest fish as an angry shark- the king of the ocean.
Are you have enough skills and brave to become the ocean’s king or the suzerain of the ocean?
Play great fish game now !
– add leaderboard
Thank you for play game !
App id = com.dhstudio.fisheatfish