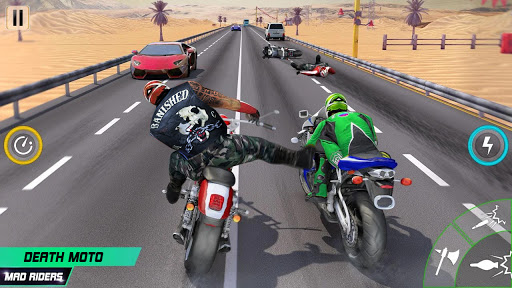 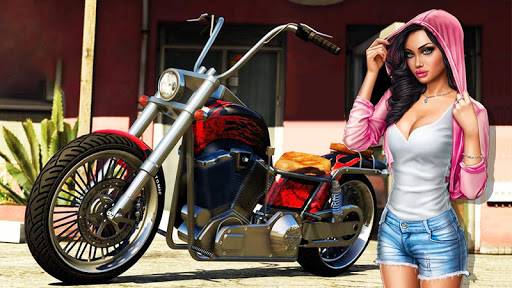 In the fiery remnants of a once vibrant world, gangs battle for dominance across war-torn highways.Now every thug, warrior, and bounty hunter with a bike and blade is out to win victory, including you. The race is on.To succeed, you’ll have to fight your way across the country, through rival gang territory, with whatever weapons you can get your hands on: swords, shotguns, baseball bats, sledge hammers, pipe bombs, and so much more.You’ll need to use what you earn and learn along the way to upgrade yourself, your ride, and your weapons. The path to glory and riches is a long one paved in blood and pain, but luckily you’ve got a fast bike.

Start Your Engine. Boost your heavy bike simulator by tapping the nitro button to whiz through the extreme traffic rush instantly. Kick and punch the rival racers to take them down and deviate their attention from the highway racing tracks. There is a huge game garage where you can buy and upgrade your heavy bikes while selecting different costumes and weapons. So gear up to beat the enemy racers and play this adrenaline fueled racing games like a real bike rider. This is full of thrilling shooting action and it will surely make you addicted.

How to Play:
• Tilt your device to steer the trail bike simulator.
• Tap bat, axe, and kick and punch buttons to beat your opponent traffic bike attack racer
• Use nitrous button to boost up your superbike simulator.
• Attack and fly over any opponents who try to overtake you in the game.

This is an action racing game where you ride your motorcycle on an epic journey of pursuit, blood, and speed. Through your travels, you will upgrade your character, bike, and weapons by completing races, assassinations, and more.

You’ll need to use kicks, grabs, counters, and other moves to stay alive. Death is a constant companion on the roads of the wasteland, but it is not an end; if you are killed, you keep everything you’ve earned so you can get back in the race.
v1.0.1
Welcome !
– New exciting Mode Added
– Levels difficulty optimised according to user feedback
– Minor Issues fixed
App id = com.racingmoto.bikergang