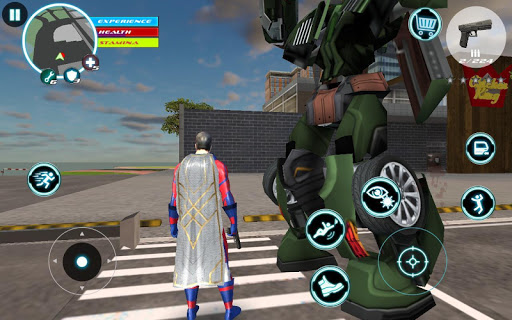 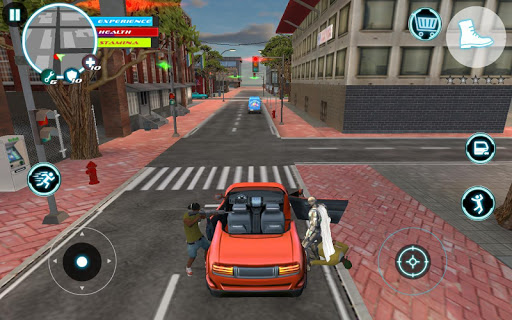 Meet the free superhero game. Start your story in this city. You have to fight the bad guys and be on guard of justice. Exciting action awaits you. Various shooters with mafia bosses and street thugs. Real superheroes act with courage and cunning. Fly around the city at high speeds. Act like a ninja and watch what is happening. Go ahead for the adventure. Test your strengths in a free third-person mobile game with RPG elements.

Your warrior has to act in a large modern metropolis. The game has its own stylized graphics. Improved minimap will show you the whole city and the most significant urban places. Do not forget to use the minimap to build a route. Navigator will pave the shortest path for your goal.

Collect collectibles and get rewards for them. Complete game missions and level the hero. Improve your kid’s skills. You can get a unique gaming experience and cool stuff. It can be super suits, cars or weapons.
Change your house by buying various real estate in the city.

Your little man will find a large number of free resources scattered in the most unexpected places, you can find: cartridges, guns, a first-aid kit and much more. Do not forget to take daily rewards, do not miss a day and get a valuable prize.

The game is adapted for mobile devices. The game has convenient interfaces that allow you to comfortably play on phones or tablets. You can adjust the quality of the graphics depending on the power of your device; play both on a weak device and on a powerful one.

Dress up your hero by purchasing the necessary things in the store. Each item will give its superman additional abilities. Gather the coolest set of things for your guy and get maximum characteristics such as: extra stamina, health, melee damage, accelerated health recovery, bullet protection, explosion protection, acceleration while running, improved driving skill.

In the game you will find a store of superhero gadgets for your little man. Items from the store will help you in difficult missions. You can get:
Rope is the most popular little thing in the arsenal of a superhero. With the help of a super rope, you will be able to move between buildings like a rock climber and attract objects. The possibilities of this thing are endless. Use your imagination to find new applications.
Super kick – will allow you to kick everything you want with great force. This thing is best suited in close combat to attack a gang of gangsters.
Super landing – will create a powerful explosion upon landing. This ability is especially effective when combined with a rope. Track down gangs of criminals and land in the crowd. Your enemies will be defeated.

Drive around town at high speeds. Test each car while racing around the city. In the game store you will find: ordinary cars, powerful sports cars, large SUVs, a SCI-FI car and much more.

Also you can buy another unique technique:
Civil helicopter – suitable for ordinary flights over the city and abrupt jumps into the urban jungle.

Military helicopter – will allow you to inflict serious damage to the enemy. Suitable for attacking fortified buildings or a large number of opponents.

Tank is a classic of the genre. The capabilities of this combat vehicle are known to you to have fun in full.

Play the free simulator and become a legend. Have fun. We hope you enjoy the game.
– Achievements reworked
– In-game improvements
App id = com.nllc.superhero

Goddess of Attack: Descent of the Goddess 1.2.28