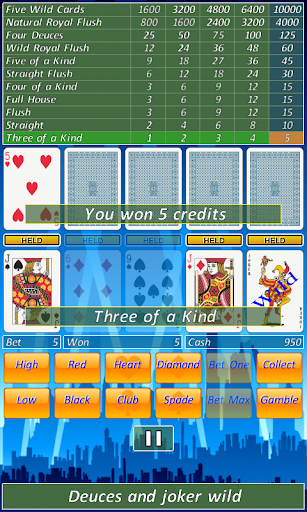 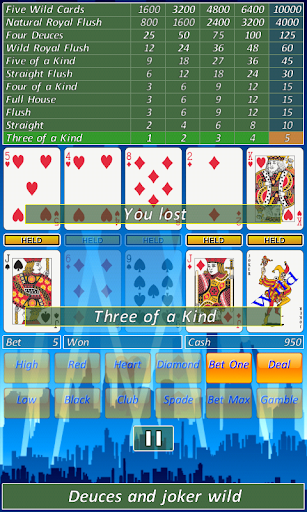 Video Poker has also been optimized for both Android phones and tablets. No money is required to play it. You win virtual coins. You will experience the full emotions and uplift of the real thing without the fear of losing money. We wrote this game so you can have fun playing video poker without gambling money.

Video Poker adds something slot machines don’t have, an element of skill. Players have to make decisions that affect the outcome of each hand. Cards are dealt from a randomly shuffled 52 or 53 – 54 card deck in the case of joker or Joker’s Wild. All the possible combinations of winning hands are known and the frequency of the combinations can be calculated. With this information an optimal playing strategy can be devised. With a lot of practice it is possible to win with this strategy, but don’t worry if your virtual coins drop to zero we will give you another 1000 so you will always be able to play. There are six statistics screens, one for each game so you can see how you are doing. Good luck and thanks for downloading our app.

GAMBLING:- Three different gambling options, or any combination of them.

Press the deal button to deal five cards. If you have a winning hand the cards will automatically be held for you. Press any card to hold or release it. Press the deal button again to replace the cards not held. If you have won, press the collect button to collect your winnings or press one or more of the gamble buttons to choose what to gamble. Then press the gamble button to reveal the next card under the ? If you gambled correctly you have the option to change what to gamble and gamble again up to another three times or press the collect button to start a new hand. Good luck.