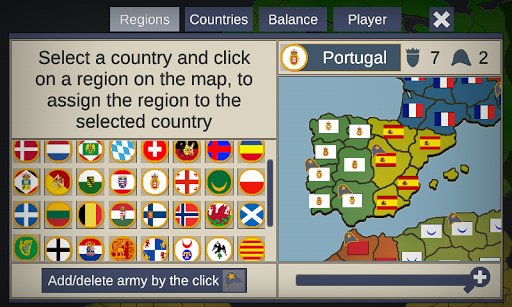 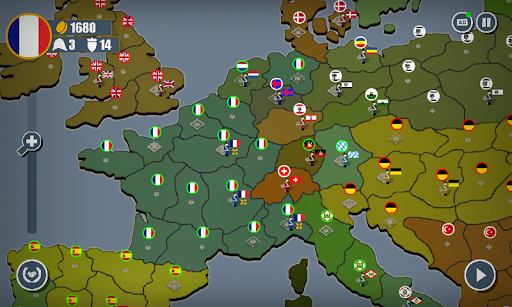 ⚫Goal of the game World conquest: Europe 1812⚫
In the game there are 56 countries for choice, at the beginning of the game you choose 1 or more countries, and playing for the country you have to conquer half of the map.

⚫Gameplay of the game World conquest: Europe 1812⚫
The gameplay of the game is that you move armies on the map and conquer enemy regions.
Regions can be upgraded, you can build walls in them, hire armies, etc.
You can recruit 10 troop squads to the army, there are 6 types of troops in the game, and they are divided into the classes: infantry, cavalry, artillery.
Also, the game has diplomacy, the diplomacy gives you the opportunity to conclude alliances with other countries, trade pacts, exchange gold, and more.

⚫Arcade Mode⚫
In the game, the ad’s viewings can be used to unlock arcade mode,
after unlocking it, arcade mode can be turned off and on in the pause menu.

⚫Main Features of Arcade Mode⚫
1) unlimited movement, and editing of all armies and troops on the map
2) editing of all regions on the map without any limit
3) everything is free for the player
4) all countries accept all diplomatic offers from the player
5) the ability to add gold to the player, or to other countries
⚫ + 11 new countries
⚫ + 4 new additional features in the “Balance” window
⚫ the “give/ask region” button added back
⚫ optimized game save system
⚫ fixed minor bugs

(After updating, you need to start a new game)
App id = com.SKGames.WorldconquestEurope1812